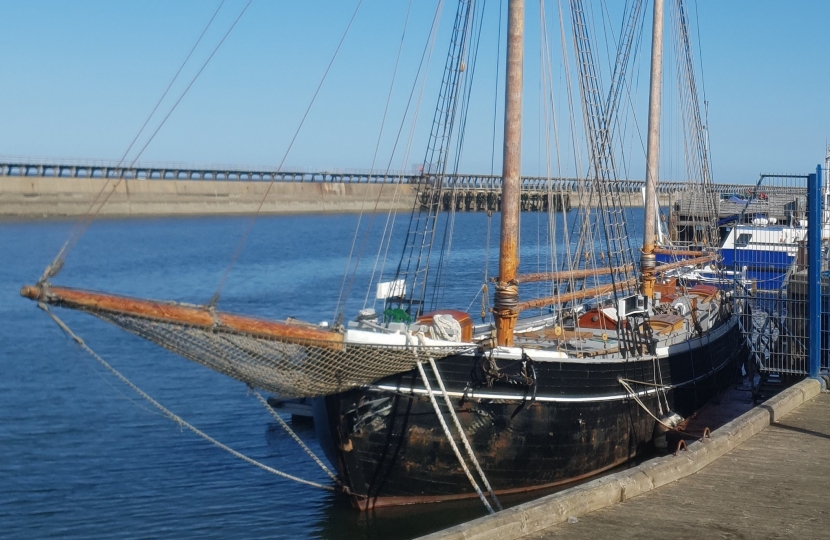 In my last update of 2021, I would like to focus on a project that has deservedly received £83,000 of funding from the Government’s Culture Recovery Fund for Heritage.  Blyth Tall Ship is inspired by a little-known part of the area’s past and delivers a future for individuals who wish to undertake industry standard qualifications up to NVQ3 in marine engineering.

Just over 202 years ago, Seaton Sluice born, and Blyth educated Captain William Smith made the first recorded landing in the British Antarctic Territory on King George Island in the South Shetland Islands.  His vessel which was a merchant brig named Williams was subsequently chartered by the Royal Navy to conduct further exploration which resulted in the sighting of Antarctica itself on 30 January 1820.

The project has its own 100-year-old plus tall ship which is of similar size to Captain Smith’s, and it has been renovated and appropriately renamed as Williams II.  The renovation was undertaken at the project’s unique heritage boatyard on Blyth quayside at almost the same location as the original ship was built.

Opportunities to sail on Williams II are regularly available.  These sailings recreate some of the voyages of William Smith around the UK and include day trips, week long experiences and longer expeditions.  The project also offers great experiences for young people and I was delighted to learn that two Kickstart trainees taken on by Blyth Tall Ship went on to successfully secure jobs at the Port of Blyth.

Specific training modules include wooden component making, marine engines, wire rigging and marine finishes.  There are also opportunities to learn how to lay a keel, fitting planks and decking, rigging a vessel and carrying out all forms of fitting and maintenance.   Trainees work alongside volunteers with a lifetime of experience in the offshore and engineering industry.

Blyth Tall Ship offers a life changing ‘Gangway to the Sea’, that brings hope and aspiration to Blyth Valley by providing skills training and individual development.  This is a brilliant approach from a fantastic project, and it is of little surprise that funding has been awarded by the Government and previously by the County Council, Jobcentre Plus, the Rotary Club of Blyth and Awards for All.