COP26 and the benefits for Blyth Valley 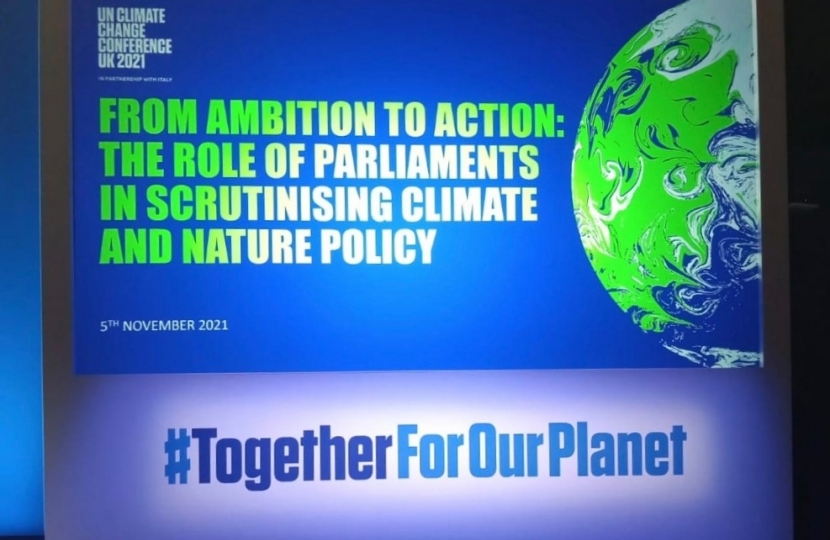 In recent days I am sure everyone has heard COP26 mentioned on the news.  I spent two days in Glasgow last week to learn more about the United Nations climate change conference.

The meaning of the name is assumed when reported but it is something that many people have asked me about with COP standing for ‘Conference of the Parties’.  The parties are most countries on the planet who have been coming together every year since 1995 except for 2020 which gives the name COP26.

The Paris Agreement came out of COP21 and this was critical in determining how the world would respond to climate change.   For the first time, there was an agreement to limit global warming to below 2 degrees and to aim for 1.5 degrees, as well as to make funding available to deliver the target.   With a marginal increase in temperature having potentially devastating consequences the Paris Agreement provides the framework to mitigate against this.

Nationally Determined Contributions are a key part of this approach with countries committed to developing their own plans for reducing their emissions.  Every 5 years an updated plan is required which should be as ambitious as possible.  Glasgow is the time for countries to update what they can do to slow global warming by reducing greenhouse gas emissions and to consider actions that are necessary as temperatures increase.

The UK has an unrivalled record in tackling climate change pre-dating the Paris Agreement whilst maintaining economic growth.  Between 1990 and 2019, the economy grew by 78% with our emissions falling by 44% which was the fastest decline in the G7 which includes the UK, USA, Japan, Germany, France, Italy, and the EU.

We have also decarbonised our economy quicker than any other G20 country since 2000 and we are the largest producer of offshore wind energy in the world.  The UK was also the first major economy to put into law that we will reach net zero carbon emissions by 2050.  In addition, new petrol and diesel cars will no longer be available for sale in the UK from 2030.

I see these policy changes also as opportunities for Blyth Valley and south east Northumberland.  I therefore welcome the work taking place at COP26 and look forward to our area also benefiting economically through green jobs.