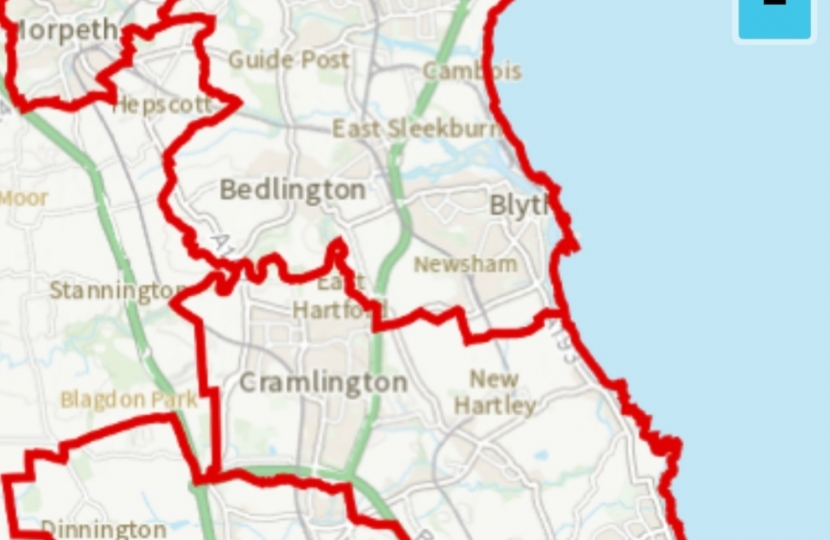 These proposals have caused concern and confusion and I believe it to be important to set out the process that will be followed.  The first point to make is that Blyth Valley has not been abolished and neither have other constituencies in Northumberland. I will remain the Blyth Valley MP for the rest of the current Parliament and by that point it will be clearer what the constituencies will be.

Over time populations have changed and led to significant discrepancies between constituencies across the country. The review is intended to bring the vast majority of constituencies within a voter population range of 69,724 to 77,062.  None of the current constituencies in Northumberland meet the minimum figure although Blyth Valley is the largest of the four with Berwick the smallest.

The current proposals involve some significant changes for Northumberland, but this is the first step in a process that won’t lead to final recommendations until mid-2023.  This first consultation will conclude on the 2nd August with a secondary consultation early next year and revised proposals at the back end of 2022.

The main changes therefore relate to the two urban constituencies with the two rural constituencies largely left intact.  I’ll be looking at the proposals very carefully in the coming weeks and invite residents to do the same.  Blyth Valley has rightly gained a name as a dynamic and proactive area that works well together as a unit and any changes need to be fully considered and understood.

There are different ways to achieve the voter numbers required.  Blyth Valley is just short of the numbers needed and it is straightforward to create a Blyth Valley ‘Plus’ constituency.   Based on the feedback I have seen so far that is the preference of most Blyth Valley residents.

A look back over recent months

Yesterday was the start of the summer recess period with Parliament not sitting again until the 6th September.  This will allow me more time in the constituency for talking to residents and businesses as well as giving me the opportunity to spend some time with my family after a very busy Parliam