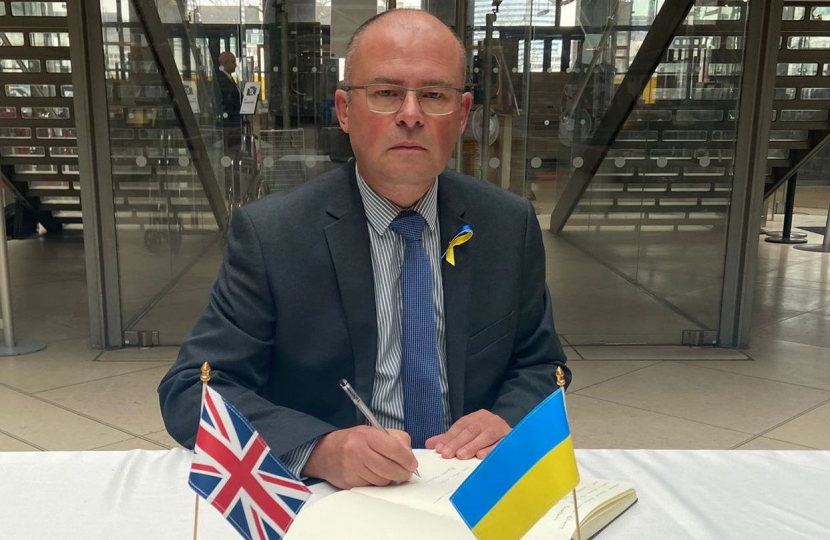 The situation in Ukraine is deeply troubling and it is essential that we stand square and work with our European and NATO allies to exert all pressure on Russia to halt this act of aggression. I have a great deal of respect and admiration for this independent sovereign nation which upholds democracy and western values. Its Government, overwhelmingly endorsed by its people in the most recent elections, have made clear their determination to join the free nations of the Western World and in due course to become members of the EU and NATO. As an independent sovereign state, they are fully entitled to do so. It is their success which so frightens President Putin whose declared ambition is to restore the power and borders of the Soviet Union.

I welcome the responsible supportive approach the vast majority of opposition MP’s have taken. We need to stand unified.

The Prime Minister has been clear that we will do what we can to assist refugees from Ukraine. The initial priority was to support British nationals and their dependants who are resident in Ukraine and wanted to get out. Officials are working around the clock to process visa applications and we have multiple routes available for Ukrainians who are not dependants of British nationals. Staff have been sent to centres in nearby countries, including Poland, Moldova, Romania and Hungary, to help those who made it across the border.

Russia's actions are likely to bring painful consequences for us all in terms of higher energy costs, a surge of refugees and the damage to world order and international law. However, these are small compared to the agonies of the innocent people of Ukraine.

I very much welcome the leadership that the UK Government has shown both in supporting Ukraine and in seeking the toughest sanctions against Russia. Both must be increased further if Russia continues its aggression. The war that Putin has launched is not just against Ukraine but against democracy and the values that we all hold dear. His willingness to tear up the pledges that Russia has made in the Helsinki Final Act, the UN Charter, and most recently the Minsk Agreements shows that this is not someone who we can trust or do business with. It is essential for global security that his aggression is not allowed to succeed.