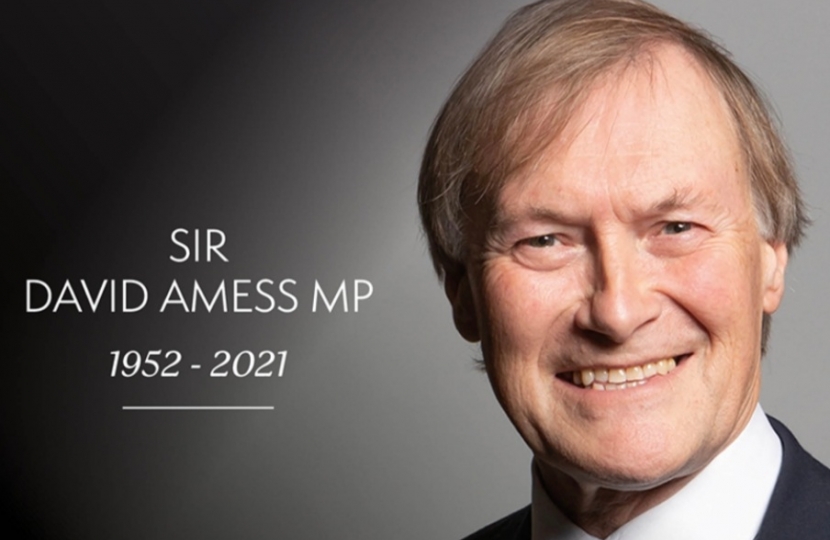 Two weeks ago, a very good MP went to work and didn’t make it home after the senseless actions of a coward who attacked him in a surgery for his constituents.  Sir David Amess was a husband, a father, a friend, and a true gentleman.

The 15th of October was a dark day in the political history of this country and one that also brought back memories of what happened to Jo Cox in 2016.  It has certainly made me think about my own safety and that of all my parliamentary colleagues who are striving to do the best for their constituents.

Reviews are already underway as to how MPs do their jobs including whether surgeries should have a Police presence which is a very drastic step but one that underlines the seriousness of the situation.  It is not just MPs who are at risk but also their staff and members of the public who attend surgeries with genuine concerns.

As an MP elected just ahead of the Covid-19 outbreak most of my surgeries with constituents have been either over the telephone or via Teams and Zoom.  I therefore do not share to the same extent the attachment to traditional surgeries of my more long-standing parliamentary colleagues and whilst I do prefer a face-to-face surgery it has been demonstrated that there are alternatives.

Safety must come first whether that is to prevent the spread of disease or to protect MPs from random attacks.  Until reviews are complete, I will continue to hold telephone and virtual surgeries rather than face to face surgeries.  This is not ideal, but I hope residents do understand the very difficult choices that MPs now face.

I don’t mind admitting that Parliament was a very daunting place when I was first elected.  But Sir David was always there for me to offer support, a few words of reassurance and a cup of tea in the tea room.  My own father died a few weeks ago and I still feel the acute pain of loss and will do for some time.

But I was fortunate as I had the opportunity to say goodbye to my father.  Sir David’s family didn’t have that chance and I can’t imagine the pain they are feeling.