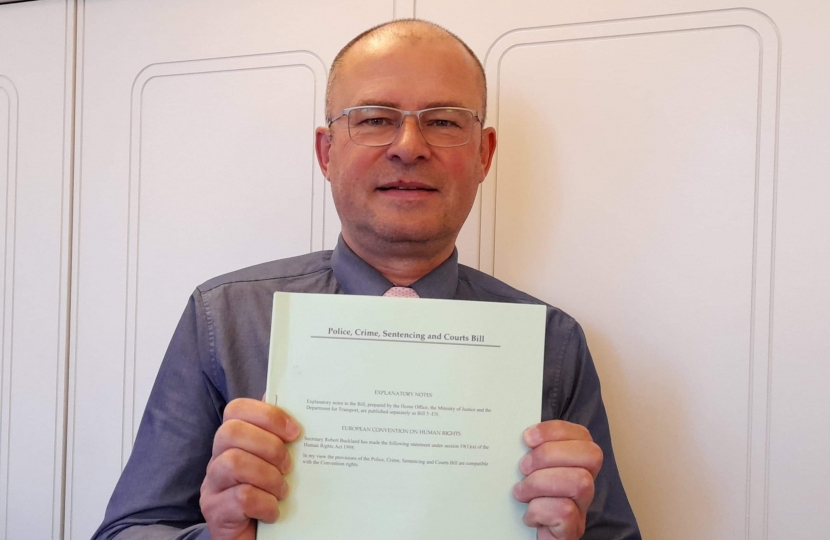 You may have heard on the news recently of a new Bill going through Parliament which is the Police, Crime, Sentencing and Courts Bill.  It is currently a Green Paper which is a consultation document that allows people both inside and outside Parliament to give feedback on policy or proposals for new laws.

The consultation at present is at the Committee Stage which I have been appointed to alongside seventeen other MPs.  The committee has already sat a number of times to hear from witnesses including Chief Constables, Police and Crime Commissioners, the Victims’ Commissioner, the Children’s Society and from barristers.

The purpose of the Bill is to introduce new laws that will equip our police officers with the powers and tools they need to keep themselves and all of us safe.  Tougher sentences will be brought forward including ending automatic halfway release from prison for the worst crimes. The court process will also be modernised and made more efficient.

The Police Covenant will be enshrined in law to recognise the service and sacrifice of our police.  The new covenant will apply to all serving or former police personnel and ensures that they and their families are not disadvantaged.  Recognising those who have served in policing unites the country and demonstrates the value of their sacrifice.

The Bill also seeks to increase the maximum penalty from 12 months to 2 years in prison for anyone who assaults or commits an offence of battery against an emergency worker which I am sure has universal support.  Police powers will also be strengthened to tackle protests that have a significant disruptive effect on the public or on access to Parliament.

An issue that has been a problem in Blyth Valley previously is unauthorised encampments where trespassers cause distress and misery to local communities and businesses.  Police powers will also be strengthened to tackle this, and new Serious Violence Reduction Orders will allow the police to stop and search adults convicted of knife and offensive weapons offences.

I am sure these tougher measures will be backed but there are also proposals that wherever possible divert children who offend from custody. Our youth justice approach will strengthen alternatives to custody which promote rehabilitation.  We will also a pilot a problem-solving court approach for adults to provide a robust alternative to an immediate custodial sentence.