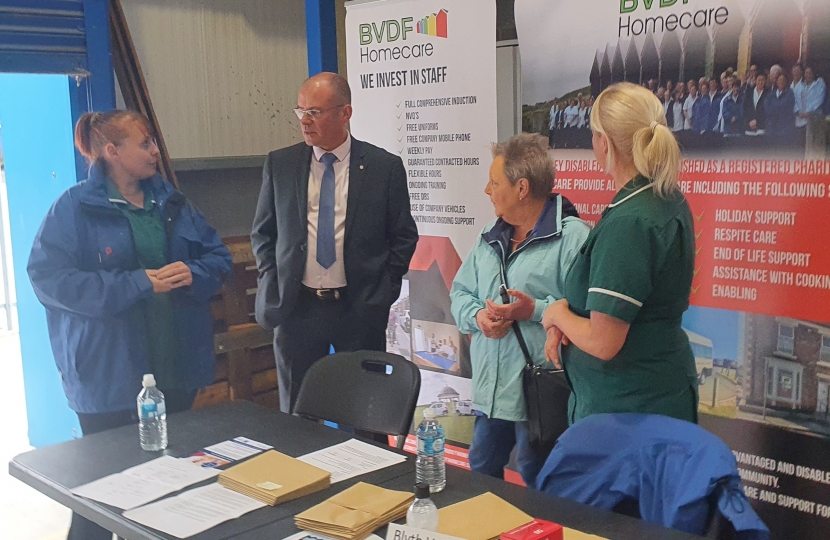 The last fortnight has focused on two main issues which were promoting Blyth Valley at the Conservative Party Conference and also preparing for and delivering the first ever Blyth Valley Jobs Fair on Wednesday.

Last week was my first party conference as MP given the cancellation of last year’s event due to the pandemic, and it is a great environment for reminding Ministers about the fantastic things that are taking place in Blyth Valley.  I spoke to Michael Gove who is the newly appointed Minister for Levelling Up, Housing and Communities and it was reassuring to hear that Michael is well briefed about what is taking place in Northumberland and was keen to learn a lot more.

As with all conferences the highlight is the speech from the Prime Minister which in true Boris Johnson style was a mixture of humour, serious messages, and ambition.  A light hearted reference to sending the ‘corduroyed communist cosmonaut into orbit’ in the 2019 election certainly drew the laughs that were intended and of course that was the start of my political journey as the Blyth Valley MP with constituents voting for change.

So much has happened since then and in a future column I’ll touch on that, but one incredible development is the birth and growth of Britishvolt who have recently achieved the status of a one-billion-dollar valued company just two years since being formed.  I continue to regularly meet with the company and their registered office in Blyth makes that very straightforward.

Britishvolt were one of the main players at this week’s Jobs Fair and were joined by their construction partner, ISG, who will lead on the building of their gigafactory.  Morgan Sindall who will construct the stations on the Northumberland Line were present and various well established Blyth Valley based companies were also on hand including Moody Logistics and Tharsus.

The retail sector was well represented by Aldi, the Co-op, Cooplands Bakery, Greggs and Lidl and it was also great to see Ashington based Akzo Nobel and Lynemouth Power Limited at the event.   The quality of the employers and jobs on offer was superb but the most important attendees were the 1,000 people who signed up.

It was a brilliant event and one that I will be repeating in future years.