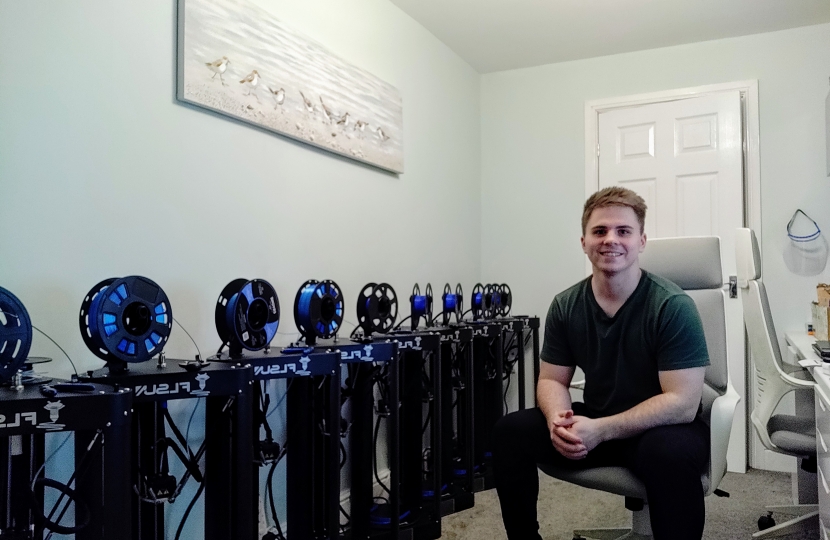 Jake Towers from Blyth has been announced as the third Community Champion by Ian Levy MP.  In little over a month, Jake produced an incredible 4,207 protective visors from his house, that he then provided free to local hospitals, care homes and district nurses.

With a background in engineering, Jake who is 23, decided he wanted to do something to help after he was furloughed from his job in early April.  Jake quickly went from having one 3D printer to ten 3D printers after a post on Facebook generated huge interest.  This was made possible through donations of over £8,500 to buy raw materials and the additional printers.

Jake was also supported by his family and they kept the printers going for 22 hours every day and 7 days a week.  At one point, production was running at over 200 visors every day with Jake also continuously improving the design of the visor.

Blyth Valley MP Ian Levy: "It is of no surprise to me that Jake was nominated countless times for this award.  What he achieved in just a few weeks is absolutely phenomenal. It was a pleasure to help out Jake with some of the deliveries and to hear the comments of appreciation that he deservedly received.

"Jake is a credit to his family who worked with him throughout.  The set up of the 3D printers was like a mini production line in the spare room of his house.  Having seen his tremendous commitment and dedication I am certain that Jake will continue to help others in the future."

Jake said: "I  would like to thank Ian for the award and his support.  I wanted to do something to help once I was furloughed but nothing would have been possible without the generous donations.  I had friends doing fundraising walks and challenges, whilst others came forward to buy the extra printers, including my brother Brent.

It is unbelievable that the idea developed into something that I never anticipated, but once I started, it was important for me to see it through.  People were so kind that I was left with about £1,000 and I am arranging for it to be donated to various local and national charities."

Blyth Valley Community Champions has been set up to by Ian Levy to acknowledge the remarkable people who are making a difference to the lives of others during the coronavirus outbreak.  Nominations can be made via the link below -

There is a weekly deadline of 5pm on a Wednesday with a Community Champion announced on Facebook and Instagram every Friday. A special reception will be held for all COVID-19 Community Champions when it is possible to do so.

When I left school at sixteen, I never considered that nearly forty years later that I would become the MP for Blyth Valley.  That I am the first ever Conservative MP in what was a Labour stronghold is something else that wouldn’t have been believable in the early 1980s.  But in 2019 that is exac