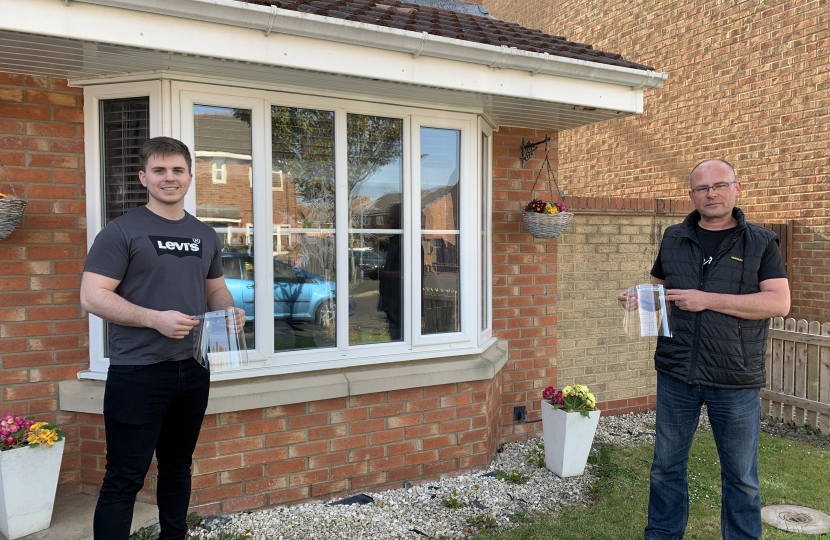 An engineer from Blyth has turned a room in his house into a production unit for protective visors that are being provided free to staff in local hospitals and care homes.  Jake Towers, who is 23, has been furloughed from his job and decided he wanted to do something to support people during the coronavirus crisis.

Using modelling software, Jake came up with a design for the visors and used a 3D printer to make the first batch.  A post on Facebook led to requests for more than 1,000 visors within 48 hours, and donations of over £7,000 allowed Jake to scale up production to 250 visors per day by buying another nine 3D printers.

Jake who has a masters degree in chemical engineering said: “I got the idea of helping out from my brother who runs a restaurant and has been offering free pizzas to key workers.  I do a lot of 3D modelling at work and thought that making protective visors could be my contribution, so I designed a frame and printed it off on a 3D printer.

“The rest of my family have been working with me so we can use the ten 3D printers almost continuously by starting at 6am and running through to 4am the following morning.   Friends have also been volunteering to do the deliveries, which has been brilliant and has meant I can concentrate on producing as many visors as possible.”

Blyth Valley MP, Ian Levy, said: “In recent weeks, I have heard about many incredible efforts from Blyth Valley residents who are doing all that they can to help others.  What Jake and his family have done is phenomenal with almost 1,700 visors produced by having a shift system in place to keep the 3D printers going.

“Next week I’ll be launching a scheme to recognise the people and groups in Blyth Valley that are doing so much to support others during this time of national and international crisis.  Jake is certainly one of those people and what he has achieved in a short space of time with such dedication is something that should inspire us all.”

Jake’s Mam, Sandy Towers, who has been covering the night shift said: “Jake has been determined to do this and has worked non-stop for over a week.  I am so proud of him and have been overwhelmed by the messages of appreciation.”

A Facebook page, North East 3D Printing for the Frontline, has been set up for orders to be placed, with Jake committed to keeping the printers going.  Deliveries so far have included to care homes across Blyth and Cramlington, the Northumbria Specialist Emergency Care Hospital and Age UK.

Ian Levy MP has welcomed news that the Prime Minister has confirmed £750,000 of funding for Blyth. The announcement is part of a wider economic package to accelerate infrastructure projects, fuelling jobs and the country’s economic recovery following coronavirus.